December 11, 2018 (Tunis) – The experts behind the development of a “Universal Protocol on Investigative Interviewing and Associated Safeguards” have met for a second time, in Tunisia this week. The purpose of the meeting was to review the initial drafting of the guidelines and to decide on key issues of substance and strategy regarding the Protocol’s future status and endorsement. The aim of these guidelines is to ensure that persons arrested, detained and questioned for investigative purposes are not subjected to torture or other forms of ill-treatment.

The first day of the meeting, December 10, coincided with International Human Rights Day as well as the 70th anniversary of the adoption of the Universal Declaration of Human Rights (UDHR) and the 34th anniversary of the adoption of the United Nations Convention against Torture by the General Assembly. “We are encouraged to be making progress on a draft Universal Protocol precisely on Human Rights Day, 70 years since the adoption of the UDHR, because the Protocol is meant to be a tool that will assist law enforcement officials and other public authorities working in the administration of justice around the world, in meeting their fundamental obligations under both of these instruments,” said former Special Rapporteur on Torture Juan E. Mendez, one of the experts behind the protocol.

The Tunis meeting of the Steering Committee followed the first workshop of the Drafting Group, in Geneva at the end of September. “The Steering Committee is very pleased with the progress made by the Drafting Group, and in particular with the way in which the draft text is shaping up reflecting standards and good practices from all corners of the world,” said Therese Rytter, one of the experts. “The drafters are working on the first draft which will offer practical guidance on the conduct of ethical investigative interviews and the effective implementation of associated legal and procedural safeguards,” she continued. 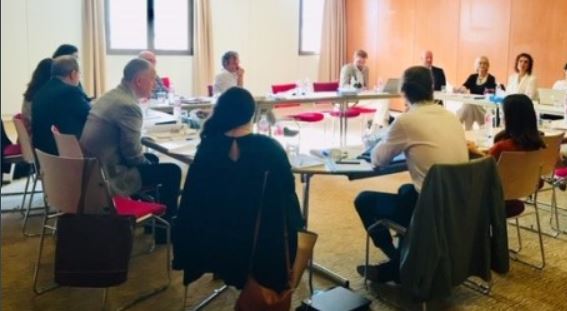 Second meeting of the Steering Committee tasked with overseeing the development of a Universal Protocol on Investigative Interviewing and Associated Safeguards, Tunis, 10 December 2018.

On December 12, an additional parallel seminar, organised by the APT and DIGNITY – Danish Institute Against Torture, will take place, with the presence of Tunisian authorities, notably the National Police, the Ministry of the Interior, the Ministry of Justice, the National Preventive Mechanism, civil society and international experts working on the development of the guidelines. The event will provide an important opportunity to discuss practical challenges and opportunities related to the future implementation, in a specific national context, of the Universal Protocol.

About the Universal Protocol for Investigative Interviewing and Associated Safeguards

The call for the development of a universal protocol that would identify a set of guidelines for non-coercive interviewing methods and procedural safeguards was initially made by former UN Special Rapporteur on Torture and Faculty Director of the Anti-Torture Initiative (ATI), Juan E. Méndez in his October 2016 report to the General Assembly (A/71/298). Building on the consensus gained during a January 2017 Strategy Meeting, hosted by the APT in Geneva, and a May 2017 meeting of technical experts in New York co-hosted by the UN Office of the High Commissioner for Human Rights, a decision was made to move forward with an inclusive, expert-driven drafting process.

In this context, a Coordination Group comprised of the APT, the ATI, and the Norwegian Centre for Human Rights was established to coordinate the process.

Additionally, an 11-member Drafting Group comprised of two sub-working groups on the topics of investigative interviewing and legal principles and safeguards, respectively, has been created and is responsible for drafting the text of the Universal Protocol.

Lastly, an Advisory Council comprising of a wide array of more than 50 experts from around the world has also been set up to accompany and provide assistance to the Steering Committee and Drafting Group throughout the process.

For more/up-to-date information about the process, please visit this page.