Did you know that the UN General Assembly adopts a resolution condemning torture and calling on States to take action every year? Have you ever thought of using the resolution in your advocacy work? If you have not, you are not alone.

Each year the annual resolution on torture and other ill-treatment is adopted by consensus, or without a vote, which means that diplomats spend hours debating the text before it goes to the floor of the General Assembly. Everyone works very hard on the resolution and then . . . not much happens.

In part, this is because outside of the narrow circle of organizations like APT who follow the UN in New York or Geneva very few people have heard of the resolution. I decided to blog about the resolution to encourage torture prevention actors to use the UN torture resolution as another tool in their advocacy work. If you try it, APT would like to hear how it went. 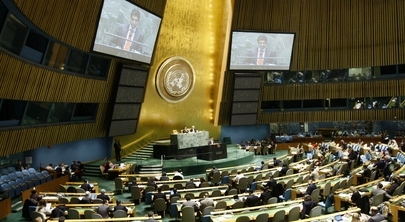 The Torture Resolution: What is it and how to use it?

Is it binding? The resolution is not legally binding like a treaty. However, you can legitimately say that the resolution reflects the consensus of all 193 members of the UN General Assembly on the aspects of the fight against torture that are covered in the resolution. Further, there were over 75 co-sponsors this year, so if you are working in one of those countries it could add extra punch to your arguments that the country co-sponsored the resolution.

What is in it? The resolution repeats many of the obligations concerning torture and other ill-treatment that appear in the core human rights treaties like the UN Convention Against Torture or in customary international law. It also provides more detail than the treaties on some topics. International law is not static and there have been developments in the law on torture in the 25 years since the Convention Against Torture entered into force. The General Assembly can and does make statements in the resolution that reflect developments in the international consensus on torture.

Example 1: you are advocating for the criminalization of torture even though your country has not yet ratified the Convention Against Torture. Paragraph two of the resolution says that “all acts of torture must be made offences under domestic criminal law punishable by appropriate penalties that take into account their grave nature”. This language is nearly identical to article 4 of the Convention Against Torture. The paragraph is not binding as such, but you could fairly say that there is an international consensus that torture must be a crime and that your country did not object to this portion of the resolution. Further, if your country co-sponsored the resolution, you could highlight that fact as well.

These are just two examples. The resolution addresses many different aspects of the fight against torture such as:

I encourage you to read it to see if could be useful in your work.

Were there any other resolutions related to torture?

There were two other UN General Assembly resolutions adopted in December 2012 that may be of interest in your work on torture prevention.

For the first time, resolution 67/166 on human rights in the administration of justice “recalls the absolute prohibition on torture . . . and calls upon States to address and prevent the detention conditions, treatment and punishment of persons deprived of their liberty that amount to cruel, inhuman or degrading treatment or punishment.” The resolution also urges States to try to reduce pre-trial detention and encourages States to address overcrowding and to look to the United Nations Rules for the Treatment of Women Prisoners and Non-custodial Measures for Women Offenders (Bangkok Rules).

Resolution 67/232 increased the UN Committee Against Torture’s bi-annual sessions from three to four weeks (again). The Committee needs the extra time to work on the backlog of State reports and individual complaints made pursuant to the UNCAT.

How do I find the texts of these resolutions?

The texts of the resolutions will eventually be posted on the United Nations website. In the meantime, you can view the texts of the resolutions as adopted by the Third Committee of the General Assembly. To do this, consult the chart on the page above. In the column labeled “draft” is the UN document number of the Third Committee report containing the draft resolution text. You can copy the UN document number into any search engine or use the UN’s document finder. The draft resolutions are inside the reports.