United against torture in Tunisia

National and international NGOs joined forces in Tunisia to mark the 26 of June, international day for the commemoration of victims of torture. Under the motto “United against Torture”, a series of cultural events, debates and discussions took place to pay tribute to the victims of torture and to pave the way for abolishing this horrible practice. 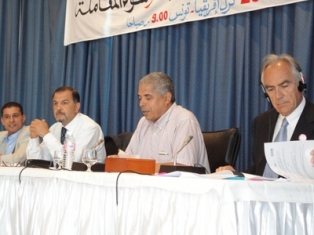 The events included screeing of testimonies of survivors of torture in the film “Handhal/Colloquinte” of Mahmoud Joumni, debating about the situation of torture at the occasion of the presentation of a report entitled “Vous avez dit justice? Etude du phénomène tortionnaire en Tunisie” of ACAT-France, issued in collaboration with Libérté et Equité and Organisation contre la torture en Tunisie (OCCT), and discussing about torture and its eradication around a tent that the Association of Association Tunisien des Jeunes Avocats (ATJA) has mounted in Tunis’ central Avenue Bourguiba. The programme was coordinated by Organisation Mondiale Contre la Torture (OMCT), in collaboration with Organisation contre la torture en Tunisie (OCCT), Action des Cretiens contre la torture (ACAT), the Rehabilitation and Research Centre for Torture Victims (RCT) and the APT.

The role of lawyers in the prevention of torture

Most torture happens in the first hours after arrest. The presence of lawyers during these first hours is an important safeguards against torture. The OMCT and the APT therefore co-hosted together with the Ordre National des Avocats and the Association Tunisienne des Jeunes Avocats (ATJA) a workshop for lawyers on their role in the prevention of torture that looked at how detainees are protected against torture if they to access to a lawyer from the outset of detention. The workshop looked at the current state of international law in relation to legal council promptly after deprivation of liberty (see APT policy paper). It also examined the gaps at national level in Tunisia, Switzerland and France to realize this right. As part of the recommendations, the Tunisian lawyers pointed out the need for legal and organizational amendments in order to enhance their role in the prevention of torture. The organizers will submit the recommendations to stakeholders involved with legal reform in Tunisia, including deputies of the Constitutional Assembly. The workshop included presentations by Me Mokhtar Trifi, honorary president of the LTDH; Prof. Fadhel Blibech, professor of law at the University of Tunis; Prof Christian-Nils Robert, member of the board of the APT and professor of penal law at the University of Geneva; Me Mondher Cherni, secretary general of OCTT; Me Lotfi Ouled Ben Hafsia, member of the bar of Paris.

In parallel, the two organizations also got the opportunity to discuss progress made by Tunisia towards establishing the National Preventive Mechanism (NPM) in accordance with the OPCAT at the occasion of a lunch hosted by the Swiss Embassy in honor of the members of the NPM drafting committee established by the Ministry of Human Rights on 26 of June. Officials of the Ministry ensured their NGO partners of their firm commitment to proceed swiftly towards the finalization of a draft law. The NGOs congratulated the officials for their commitment, but also request enough time to consult the draft law broadly, in a view to provide the future NPM with a maximum of legitimacy and credibility.

Prohibition and prevention of torture

During the different consultations concerning the implementation of the OPCAT in Tunisia, actors have called for the future independent National Preventive Mechanism (NPM) to be given a strong legal basis in the constitution. The APT was given the opportunity to discuss about the constitutional guarantees for the prohibition and prevention of torture at the occasion of a visit to the Constitutional Assembly on 27 of June. The deputies from different political horizons all agreed on the importance of enshrining the absolute prohibition of all forms of torture in the constitution and were open to include further guarantees against torture and ill-treatment. However, the APT learned that the commission concerned with constitutional bodies has not looked into the National Preventive Mechanism yet. More lobby work thus needs to be done to ensure for the future torture prevention mechanism to become a constitutional body.  Constitutional entrenchment...
United against torture?

The extradition of former Libyan Prime Minister Mahmoud Baghdadi, implemented by the Tunisian government on June 24 despite the risk of torture and therefore in breach of the UN Convention against Torture, however tarnished the celebration of this international day in support of victims of torture. The extradition has been strongly criticized by human rights organizations.